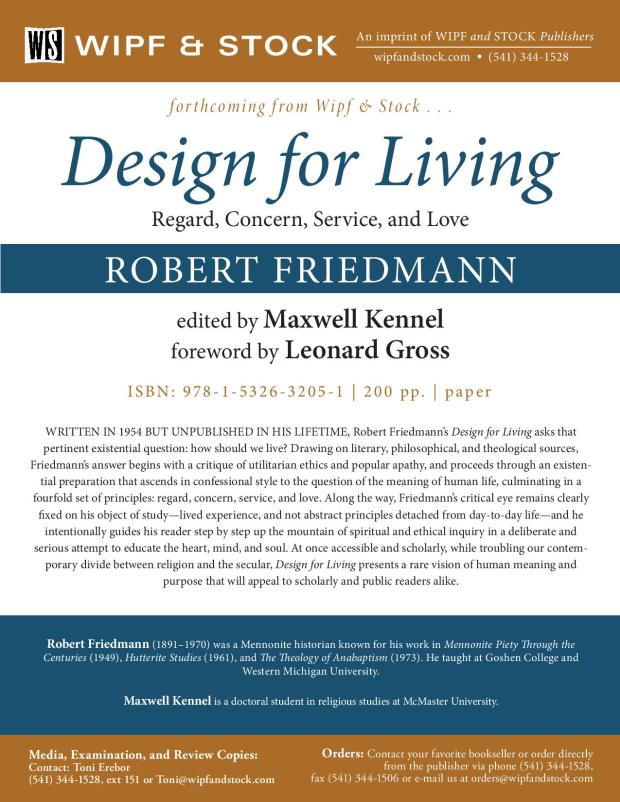 “Friedmann writes lucidly, with a free flowing style and above all with keen and empathetic discernment as a man who has cut for himself a broad swath of life and has drunk deeply at its richest sources and overlooks the highest peaks of human aspiration as well as its illusions and pitfalls.” – Clarence Bauman

Written in 1954 but unpublished in his lifetime, Robert Friedmann’s Design for Living asks that pertinent existential question: how should we live? Drawing on literary, philosophical, and theological sources, Friedmann’s answer begins with a critique of utilitarian ethics and popular apathy, and proceeds through an existential preparation that ascends in confessional style to the question of the meaning of human life, culminating in a fourfold set of principles: regard, concern, service, and love. Along the way, Friedmann’s critical eye remains clearly fixed on his object of study – lived experience, and not abstract principles detached from day-to-day life – and he intentionally guides his reader step by step up the mountain of spiritual and ethical inquiry in a deliberate and serious attempt to educate the heart, mind, and soul. At once accessible and scholarly, while troubling our contemporary divide between religion and the secular, Design for Living presents a rare vision of human meaning and purpose that will appeal to scholarly and public readers alike.

Robert Friedmann (1891-1970) was a Mennonite historian known for his work in Mennonite Piety Through the Centuries (1949) and Hutterite Studies (1961), and The Theology of Anabaptism (1973). He taught at Goshen College and Western Michigan University.

Maxwell Kennel is a PHD candidate in the Department of Religious Studies at McMaster University. View all posts by Max